The energy efficient motor market is expected to be valued at USD 41.57 Billion by 2023, growing at a CAGR of 6.5% between 2018 and 2023. The major factors driving the growth of this market include the saving of energy and subsequent cost over traditional motors, increasing support from governments worldwide for the adoption of energy efficient motor, rising need to diminish greenhouse effect, and increasing adoption of energy efficient motors in the industrial sector. Energy efficient motors are used in various application areas in the agriculture vertical; these applications include irrigation, ventilation, grain handling, material handling, aeration, and conditioning. Motors are among the largest energy consuming devices on farms. Motors used in the agriculture sector account for 18% of the on-farm energy consumption worldwide. Also, the energy saving solutions are applicable to all segments of the agriculture sector including dairies and livestock producers, nurseries, crop farmers, and food processing companies. This would further propel the growth of the market during the forecast period.

This report segments the market on the basis of efficiency level, type, vertical, application, and geography. The pumps application accounted for the largest share of the market in 2017. Pumps are used in various end-user industries such as water and wastewater, oil and gas, agriculture, and commercial. Further, the pump application is a major shareholder of the market as the pumps are the major consumer of electricity in the industrial sector.

The AC motors accounted for a larger share of the market in 2017. This growth is attributed to the rising concern over carbon emissions and increasing consumption of power, which has encouraged the development of more energy efficient AC motors. The energy efficient motor market for DC motors is expected to grow at a higher CAGR between 2018 and 2023. 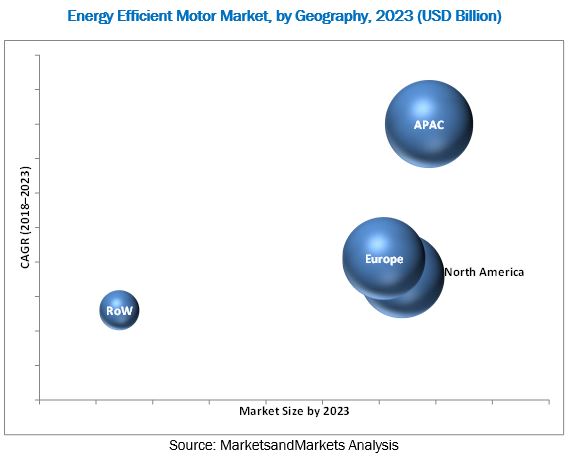 On the basis of geography, the energy efficient motor market is segmented into North America, Europe, Asia Pacific (APAC), and Rest of the World (RoW). North America accounted for the largest share of the overall market in 2017. However, the market in APAC is expected to grow at the highest CAGR during the forecast period, and it would supersede the North American by 2023. The rising energy prices, which have increased the concern about the efficient use of energy, and several measures taken by the Department of Energy (DOE) from various countries in APAC are encouraging the industries to switch to high-efficiency motors (HEMs) that consume less power, resulting in the growth of the energy efficient motors market in this region.

Currently, there is lack of awareness about energy efficient motors among various end users; however, the situation is expected to change positively in the coming years. Motor purchasers lack sufficient information regarding the potential of these motors to save on energy and cost incurred by the excessive energy consumption. The problems associated with obtaining information arise from the inadequacy of information about the efficiency level of motors and lack of knowledge regarding the energy saving opportunities provided by these motors. Therefore, they are less willing to adopt these motors. There has been a gradual information wave elucidating and educating the end users, which is expected to gain momentum in the coming years, leading to the increased adoption of energy efficient motors.