The Voice Recognition System Market for Automotive is estimated to be USD 941.0 Million in 2017 and is projected to reach USD 3,890.3 Million by 2025, at a CAGR of 19.41% from 2017 to 2025. The key growth drivers for the market are the rising trend of autonomous vehicles, integration of several electronics functions in central console of the car by OEMs, and growing demand for connected vehicles.

The non-AI-based segment is estimated to hold the largest market share in 2017. However, the AI-based voice recognition system is estimated to be the fastest growing market during the forecast period and is anticipated to grow at a rapid pace due to technological advancements. In addition, the technology-driven companies are using the AI-based voice recognition system as a tool for developing advanced infotainment features for autonomous and semi-autonomous vehicles. 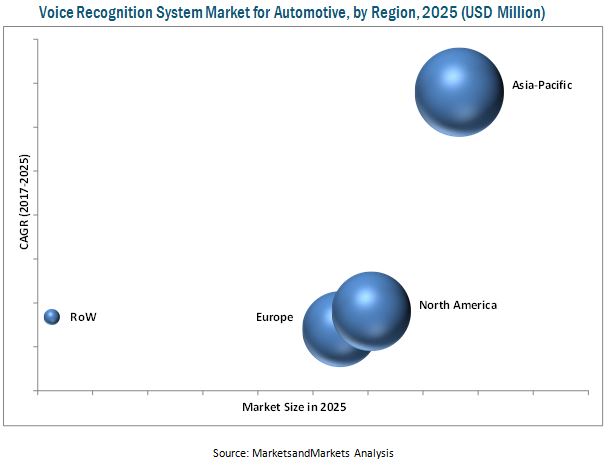 The Asia Pacific region is projected to be largest market for voice recognition system for automotive in 2025. Rise in the production rate of automobiles and significant adoption of advances technologies in automotive electronics are the market drivers in this region. Being the largest market of passenger vehicles, North American voice recognition market is estimated to be the largest in 2017. The rapid growth of semi-autonomous and autonomous vehicles coupled with rise in consumer demand for convenience features in mid-variant cars are the factors putting North America region at leading position in 2017.