The blockchain government market is expected to grow from USD 162.0 Million in 2018 to USD 3,458.8 Million by 2023, at a Compound Annual Growth Rate (CAGR) of 84.5% during the forecast period. The major drivers of the market include the growing interest in the blockchain technology adoption by the government sector, increasing instances of fraudulent activities in the public sector, need to provide protection against data tempering, upswing in the usage of blockchain technology to create transparent and decentralized government, and focus on increasing efficiency and speed in public sector transactions.

The blockchain government market study aims at estimating the market size and future growth potential of the market across different segments, such as provider, application, and region. The application segment includes, asset registry (land/real estate registry), identity management, payments, smart contracts, elections/voting, and others (healthcare, public transport, and supply chain & logistics). The smart contracts segment is expected to dominate the application segment in terms of contribution to the overall market, as government agencies are deploying blockchain based smart contracts to reduce costs of verification, execution, arbitration and fraud prevention.

The blockchain government market has been segmented on the basis of providers into 3 categories: application providers, middleware providers, and infrastructure providers. These providers offer infrastructure to develop in the blockchain-based platforms. Among these segments, the application providers segment is the fastest growing segment in the overall market. The introduction of technologically advanced blockchain solutions has witnessed a certain level of adoption in government agencies thereby fueling the overall market growth. 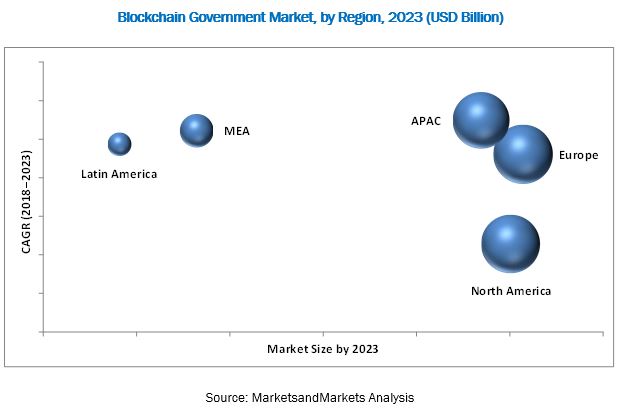 Key financial hubs and massive shipping and trading markets, including Hong Kong and Singapore, provide large users of the blockchain in the public sector. However, lack of awareness and technical understanding about the blockchain technology can act as a restraining factor for the blockchain government market growth across regions.