The report segments the market, on the basis of application, into on-grid and off-grid systems. The on-grid segment led the market in 2016. Grid-connected installations are largely used as a long-term investment to provide energy for local loads and for the exchange of power with utility grids. These are used for power generation by various end-users including industries and manufacturing applications.

The global market, by technology, is segmented into solar PV, wind, microturbines, reciprocating engines, fuel cells, and gas turbines, of which, solar PV is the fastest growing segment. The decreasing costs of solar installations, attractive incentives, and greenhouse gas emission restrictions are expected to drive the adoption of solar PV technology for power generation during the forecast period.

The report further segments the market, by end-user into industrial, commercial, and residential segments. The commercial segment of distributed generation is expected to grow at the highest CAGR during the forecast period. Government initiatives toward green solutions, the growing demand for reliable power, and easy availability of fuel are expected to drive the growth of the global market during the forecast period.

In this report, the market has been analyzed with respect to six regions, namely, North America, Europe, Asia Pacific, South America, the Middle East, and Africa. Europe is expected to dominate the market during the forecast period, owing to the continued increase in energy consumption mainly from by the industrial and commercial sectors, which contributed to the largest demand for distributed generations. The demands from the IT and telecommunication sectors are also driving the market. The figure given below shows the market size of the year 2022 in various regions, with the respective CAGRs. 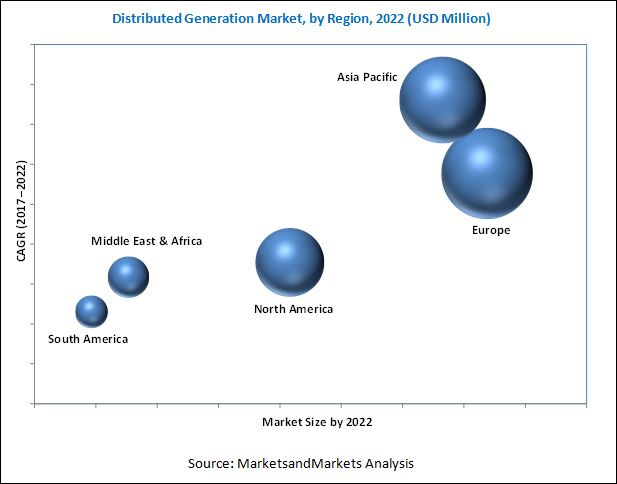 The major factor restraining the growth of the market is the reluctance to spend on distributed generations technologies as it takes a lot of investments, effort, and time to alter and switch to decentralized business models which were earlier functioning in a traditional centralized way.

Some of the leading players in the distributed generation market include Siemens (Germany), GE (US), Schneider (France), Mitsubishi (Japan), and Capstone (US). These players have adopted growth strategies such as new product launches, contracts & agreements, mergers & acquisitions, and expansions to capture a larger share in the market.