The meat speciation testing market is projected to reach USD 2.22 billion by 2022, at a CAGR of 8.2% from 2016. Religious concerns among consumers drive demand for halal and kosher certification and related speciation testing for meat & meat products. The growth of meat certification in the global market is driven by the increasing stringency of the regulatory body over safety and meat authenticity. The same, in turn, is driven by the increasing consumer demand for certified products, which are perceived to be authentic and compliant to Islam and Jewish laws for halal and kosher, respectively.

The global increase in malpractices and the number of fraud and adulteration incidents for meat & meat products have resulted in the enhanced growth of this market. Thus, given the widespread cases of adulteration and food fraud, along with growing consumer concern for safety & quality, and with increasing stringency of regulations and their effective monitoring of the supply chain, the market for speciation testing is projected to grow at a significant rate in the upcoming years.

The meat speciation testing market, based on species, has been segmented into cow (Bos taurus), swine (Sus scrofa), chicken (Gallus gallus), horse (Equus caballus), sheep (Ovis aries), and other species such as turkey, goat, and rabbit. The chicken (Gallus gallus) segment is projected to grow at the highest CAGR among all species from 2016 to 2022. However, with the increasing prices of chicken, several meat manufacturers and processors are engaged in fraudulent practices and are involved in adulteration and fraudulent substitution of chicken with pork and other contaminating species. Several cases of chicken meat adulteration have been detected around the world, which is fueling market growth for the chicken (Gallus gallus) segment.

The global market, based on technology, has been segmented into PCR, ELISA, and other technologies (such as LC-MS/MS). The PCR segment is projected to be the largest and fastest-growing by 2022. Besides the market drivers, significant growth in adoption of this technology for meat speciation testing can be attributed to drawbacks of the ELISA (enzyme-linked immunosorbent assay) technology, wherein DNA analysis is conducted by the technology for accurate determination of meat species in products even at 0.1% levels of detection. 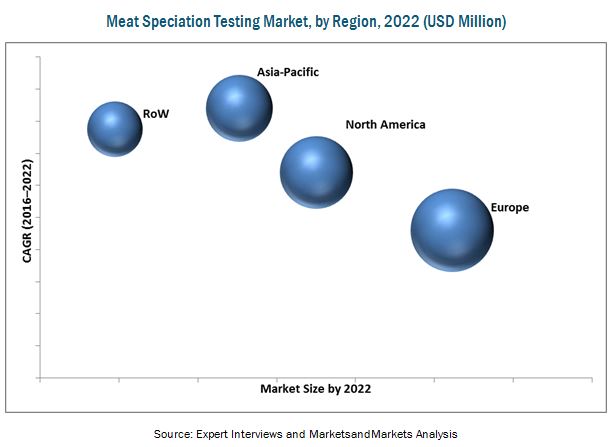 The meat speciation testing market is estimated to be dominated by the European region in 2016. Europe dominated the market, worldwide. European countries have recorded many issues related to meat adulteration, due to which the region has dominated the market. The Asia Pacific region is projected to be fastest-growing by 2022 in the market. The meat speciation market in the Asia-Pacific region is dominated by China. Food safety procedure compliance in Europe (a major importer) is more severe, and Chinese food producers have to comply with the food standards and regulations for trade.

Food systems in several developing regions lack organization, sophistication, and technology in meat speciation testing, which is restraining the market growth.
New service launches, expansions & investments, and acquisitions are the key strategies adopted by the players to ensure their growth in the market. Companies such as VWR International (US), Eurofins (Luxembourg), ALS Limited (Australia), Neogen (US), and LGC Science (UK) have acquired leading market positions through their broad service portfolios that are specific to various meat species segments. The companies are also focused on innovations and geographical diversification. In June 2015, Eurofins launched an innovative analytical method based on DNA chip technology, which enables simultaneous detection and identification of up to 21 animal species in feed and food products. This helped the company to expand its service portfolio.