The bacteriological testing services market is estimated to be valued at USD 9.58 Billion in 2017, and is projected to reach 13.98 Billion by 2022, at a CAGR of 7.8% during the forecast period. The market is driven by the global increase in outbreaks of foodborne illnesses, implementation of stringent food safety regulations in developed economies, and increase in microbial contamination in water reservoirs due to rise in urban & industrial waste.

The bacteriological testing services market, based on bacteria, has been segmented into Coliforms, Salmonella, Campylobacter, Legionella, Listeria, and others. The market for testing for Salmonella dominated in 2016, and is also projected to be fastest-growing segment during the forecast period. The severity of infection by this pathogen is generating demand for Salmonella testing in food and water samples, which in turn is driving the market for bacteriological testing.

The bacteriological testing services market, by technology, has been segmented into traditional and rapid. The rapid technology segment dominated the market in 2016, and is projected to grow at a higher CAGR by 2022. This is due to low turnaround time, higher accuracy, sensitivity, and ability to test a wide range of bacteria in comparison to traditional technological methods. 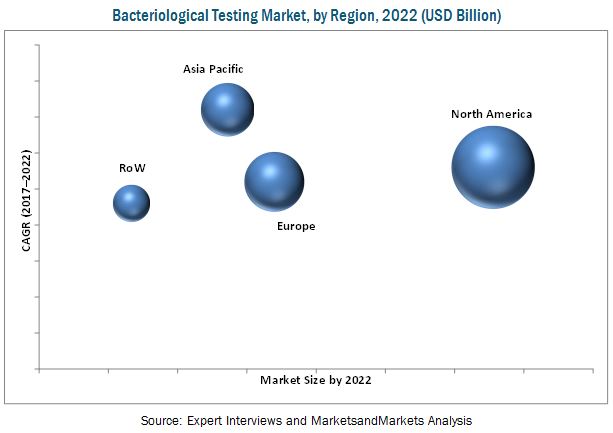 North America accounted for the largest market share in the bacteriological testing market. The dominant share of this region is attributed to the stringency of food safety regulations and laws pertaining to nutritional content and labeling in the region. It has the highest number of testing laboratories among all regions and tests the most number of bacteriological samples. The growth of the Asia Pacific market is projected to be the fastest from 2017 to 2022, and is driven by China, Australia, and Southeast Asian countries, as these countries are becoming more aware of food safety and are implementing regulations for their testing.

Lack of food control systems, technologies, infrastructural support, and resources in developing countries are the major restraints for this market.