The global battery market is expected to grow from USD 14.08 billion in 2016 to USD 17.25 billion by 2021 at a CAGR of 4.15%. The Li-Ion battery market in the automotive industry is the fastest growing battery market with its volume expected to double by 2021, owing to a global increase in electric as well as plug-in hybrid vehicle production. Successful commercialization and attractive incentives ensured that OEMs introduced new hybrid or electric models. Considering the stringency of emission norms and global demand for fuel efficiency, OEMs are developing products for future transportation needs. Since the inception of electric vehicles, the number of OEMs manufacturing electric vehicles has increased seven times and the number of models has increased almost nine times. Major OEMs such as BMW Motors, Honda Motor Company, and Daimler AG, among others have announced a major push towards hybrid and electric vehicles.

An automotive battery is an indispensable component of the powertrain of a vehicle, independent of the fuel used for its operation. It is used to power the electrical systems of the vehicle when the engine is turned off. It is also used to start the engine, providing the current for the ignition system and the electric starter motor. The energy from the battery is also utilized, when the electric requirement of the vehicle exceeds its alternator’s capacity. A majority of the vehicles use a 12V lead acid battery for these applications. However, depending on the powertrain and the OEM, a vehicle may require nickel-metal hydride (Ni-Mh) or lithium-ion (li-ion) battery packs for propulsion. With increasing powertrain variants in passenger car applications, appropriate batteries are being developed. Given their applications and rising focus on sustainable transportation, suppliers and OEMs are focusing on increasing the efficiency of conventional as well as new technologies.

The global automotive battery market has been segmented, on the basis of type, into Lead Acid, Ni-MH, and Li-Ion. The market for Li-Ion is expected to grow at the highest CAGR between 2016 and 2021. Among all battery type, lead acid is the most widely used in automotive industry. Lead acid batteries are widely used owing to low material costs, safety and recyclability however; low energy density is a drawback for their application in hybrid applications.

The battery market in APAC is expected to be the largest market during the forecast period. This region is witnessing rapid infrastructural, economic, and technological development. The large population in this region makes it an attractive market for the automotive and two-wheeler industry. An increase in the demand for commercial aircraft and automobiles has made this region a vital part of the global market for suppliers. Increase in trade activity of this region has also increased the need for marine batteries.

The increasing penetration of automotive and marine batteries and the influx of global players, along with the emergence of native players, are contributing to the growth of the market. As a result, APAC holds a significant share of the market. 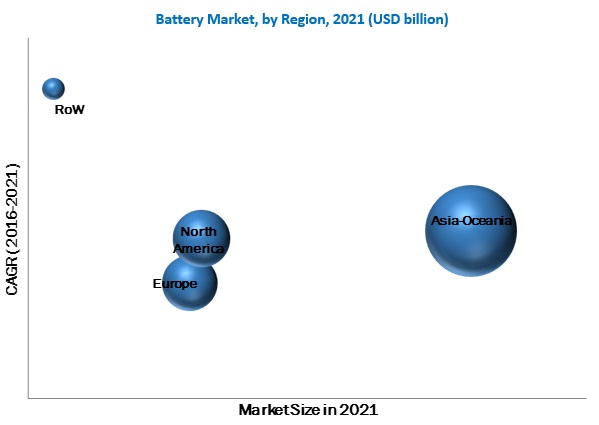 Lead acid batteries are used in all passenger car applications for SLI functions or for supplying 12V power to the electrical system of a vehicle. Lead acid batteries in passenger cars are wet-charged and consist of secondary cells, which are capable of multiple charges and discharges. Automotive lead acid batteries have gone major developments to accommodate increasing electrical requirements of modern automobiles and increasing need for efficiency. Absorbent Glass Mat (AGM) batteries were developed, where electrolyte is held in glass mats instead of free floating plates. It uses thin glass fibers in the mat to increase the surface area. Given its advantage of high-specific power and faster charge time, it is used in micro hybrids for start-stop systems and high-end luxury and sports cars.

The Ni-MH battery is a proven and mature technology for hybrid applications, and is used by OEMs including Toyota, Honda, and Lexus, among others. OEMs prefer these batteries for their safety, performance, and longer lifecycle in hybrid applications. However, this technology is facing stiff competition from li-ion batteries due to lower energy density and cyclic lifetime.

Li-ion batteries are widely used in electric vehicles and in a few hybrid vehicles. Li-ion offers higher energy density, which makes these batteries suitable for electric vehicle applications due to high power and minimal weight. Since range of an electric vehicle is a major concern for end-users, automotive OEMs have to adopt batteries with higher capacities without increasing weight.

The underdeveloped support infrastructure for EVs is restraining the growth of the market. The acceptance of plug-in and electric vehicles majorly depends on the presence of charging infrastructure. In 2014, the market potential has been limited following several concerns about vehicle range and limited presence of charging stations. In the U.S., there are approximately 120,000 gasoline stations, whereas only 20,000 electric charging stations are available for public use. This has resulted in an increase in the risk, actual as well as perceived, of being stranded without access to a charging station for end-users.