The angiography equipment market is projected to reach USD 13.06 Billion by 2023 from USD 10.26 Billion in 2018, at a CAGR of 5.0%. The growth in this market is attributed to the high prevalence of diseases such as cancer and CVDs, increasing product approvals for advanced angiography techniques in the market, the large number of ongoing research activities, growing government and public-private investments, increasing number of awareness programs, and rising adoption of angiography devices due to a large number of angiography procedures performed across the globe.

The market in this report is segmented by product, procedure, application, and end user. This report also provides market information on major regional segments of the market, namely, North America, Europe, Asia Pacific, Latin America, and the Middle East & Africa.

Based on product, angiography systems dominated the market in 2017. The large share can be attributed to factors such as technological advancements in angiography devices, increasing number of patients with cardiovascular diseases and other chronic disorders, and growing number of angiography procedures across the globe.

By procedure, the coronary angiography segment accounted for the largest share of the angiography equipment market in 2017. This dominant share is mainly attributed to the increase in the prevalence of coronary heart diseases due to the growing aging population. Moreover, increased awareness about the benefits of timely detection and treatment of coronary diseases and technological advancements are also expected to drive the growth of this market in the next five years.

On the basis of end users, the global market is segmented into hospitals & clinics, diagnostic and imaging centers, and research institutes. In 2017, the hospitals & clinics segment accounted for the largest share of the global market. The growth in this segment is attributed to the large number of patient pool diagnosed and treated at hospitals, the high purchasing capacity of hospitals for advanced technologies, rising number of diagnostic and therapeutic angiographic procedures, and growing awareness on timely disease diagnosis. 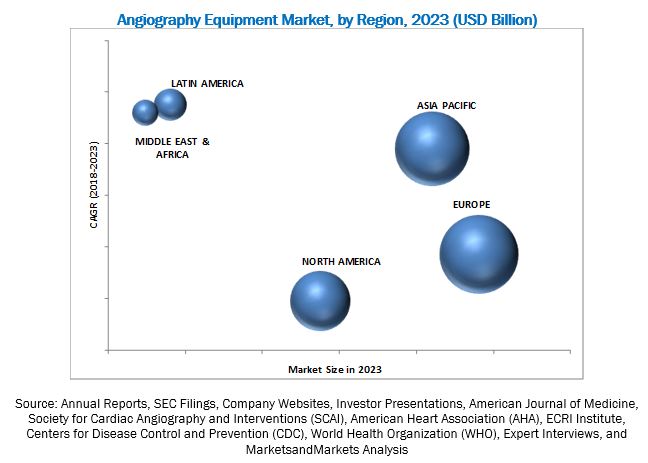 In 2017, Europe dominated the global market. The large share of the European market can be attributed to factors such as the high prevalence of diseases such as cancer and CVD, the faster and easier product approval process in the region, the large number of ongoing research activities, growing government and public-private investments, increasing number of awareness programs, and rising adoption of angiography devices due to a large number of angiography procedures performed in European countries.

However, factors such as lack of reimbursement for angiography procedures and risk of radiation exposure are expected to hinder the growth of the market to a certain extent.