The coronary stent market is expected to reach USD 10.31 billion by 2021 from USD 7.16 billion in 2016, at a CAGR of 7.6% from 2016 to 2021. The market is mainly driven by factors such as technological advancements, increasing number of percutaneous coronary intervention (PCI) procedures, rising burden of CAD, increasing demand for minimally invasive procedures, and rising geriatric population.

A coronary stent is a small, expandable tube-shaped device placed in the coronary arteries that supply blood to the heart. Coronary stents are used in percutaneous coronary intervention (PCI) procedures to treat patients with coronary artery disease (CAD). They are used for a wide range of indications in CAD, including de novo lesions, small-vessel disease (SVD), bifurcation lesions, and tortuous and narrow lesions.

On the basis of material, the coronary stent market is segmented into metallic stents (cobalt chromium, platinum chromium, nickel titanium, and stainless steel), and other stents. The other stents segment is expected to grow at the highest CAGR during the forecast period. The high growth in this segment is attributed to the growing utilization of polymers and copolymers for the development of bioabsorbable stents.

On the basis of end user, the coronary stent market is segmented into hospitals, cardiac centers and ambulatory surgical centers. The hospitals segment is estimated to dominate the market in 2016. This can primarily be attributed to high utilization of coronary stents in hospitals. 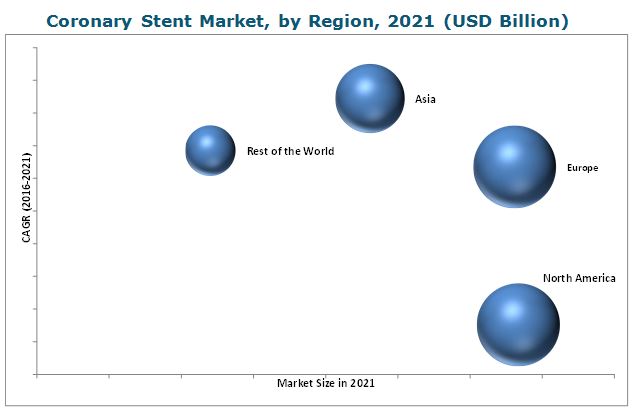 The market is dominated by North America, followed by Europe, Asia, and the Rest of the World. North America is expected to dominate the market in 2016. Asia is expected to grow at a highest CAGR during the forecast period. Factors such as large population base, growing prevalence of cardiac diseases, rising adoption of advanced technologies, and low manufacturing costs in the region are expected to drive market growth in Asia. Moreover, the growing focus of major players in this region is expected to boost the coronary stents market in Asia.

Coronary angioplasty is the most widely adopted procedure for the treatment of blockages in arteries; however, there are several alternative methods that can be used over stenting in the treatment of CAD. Laser angioplasty, atherectomy, CABG, cardiomyoplasty, heart transplant, and port-access coronary artery bypass are few such alternatives that are considered in some cases. The most widely used surgical alternative for a coronary angioplasty is CABG; it is usually recommended when multiple coronary arteries have become blocked and narrowed. Though coronary angioplasty has fewer risks, the number of people who need further surgery is high because of the use of stents. On the other hand, though CABG has a longer recovery time, only 1 in 10 patients who undergo this procedure require further treatment. Also, CABG is usually a more effective treatment option for people who are over 65 years of age and people with diabetes. In some countries, the cost of both coronary angioplasty and bypass surgery is almost the same. Thus, many patients opt for bypass procedures to avoid the risk of restenosis. These factors are expected to restrain the growth of the coronary stents market in the coming years.