The exoskeleton market is expected to be valued at USD 299.8 Million in 2017 and is estimated to reach USD 2,810.5 Million by 2023, at a CAGR of 45.2% between 2017 and 2023. The market is mainly driven by the factors such as the growing demand from healthcare sector for robotic rehabilitation, advancements in robotic technologies, and huge investments for the development of exoskeleton technology.

The exoskeleton market is segmented on the basis of components into hardware and software. The hardware component is subsegmented into sensor, actuator, power source, control system/controller, and others. Other components include body material and other electronic, electrical, and mechanical components. The market for software is expected to grow at a higher CAGR during the forecast period. As technological advancements will lead to the growing complexity in terms of features such as inter-device connectivity, artificial intelligence (AI), and autonomous operations, the software segment is likely to gain more importance than that of the hardware segment in the overall market as software will assist the complex functionalities to process efficiently and accurately.

The exoskeleton market is segmented on the basis of types into powered and passive. The market for powered exoskeletons is expected to grow at a higher CAGR between 2017 and 2023. At present, powered exoskeletons are used mainly in the healthcare vertical to assist people with disabilities, but with the introduction of cost-effective system and because of its additional benefits over the passive ones, powered exoskeletons will find its way in several new verticals, ultimately resulting in the high growth of the segment during the forecast period.

The exoskeleton market has been segmented into the following 4 verticals: healthcare, defense, industrial, and others, which include construction, search and rescue, space, agriculture, education, and sports and fitness. The healthcare vertical accounted for the largest share of the market in 2016. The market for the defense vertical is expected to grow at the highest CAGR during the forecast period. Exoskeletons have the ability to assist soldiers on the field for lifting heavy weapons and to move faster and cover a larger area on the battlefield; hence, the defense sector of several nations is looking forward to deploying exoskeletons to strengthen its security.

The exoskeleton market is broadly classified on the basis of geographic regions into the Americas, Europe, APAC, and RoW. The market in APAC is expected to grow at the highest CAGR during the forecast period. APAC is likely to adopt exoskeletons for almost all major verticals such as healthcare, industrial, and defense during the forecast period. As the elderly and disabled population in APAC countries, such as China and Japan, is on the rise, the region is expected to employ exoskeletons for the rehabilitation and personal assistance applications. 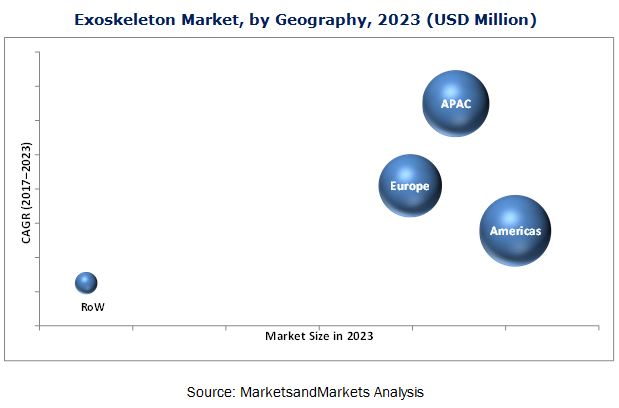 Stringent government regulations pertaining to medical applications inhibit the exoskeleton market growth. Furthermore, high equipment cost has been a key challenge facing by the industry. However, factors such as increasing adoption of human augmentation in industrial and military sectors, introduction of soft actuators, and adoption of the exoskeleton technology by insurance companies in their plans can generate significant opportunities for this market.