The augmented reality in retail market is expected to be USD 1,155.8 million in 2018 and is projected to reach USD 7,951.2 million by 2023, at a CAGR of 47.1% during the forecast period. Increasing online shopping encourages retailers to adopt AR, rising smartphone penetration, and growing adoption of connected devices are the major factors driving the growth of the augmented reality in retail market. Conventional strategies of advertising and marketing, as well as transactional sales, have been greatly revolutionized with the addition of innovative technological advancements; together these progressions have uplifted the retail industry. The fierce competition in the retail industry has encouraged retailers to adopt advanced technologies in their space. Consumer engagement through online and offline modes is the most effective strategy adopted to sustain and grow in the retail industry.

Growing adoption of smart AR mirrors in the clothing industry has helped boost the AR in retail market. Smart mirrors are being increasingly used for virtual apparel fitting as a try-before-you-buy option. The use of try-on solutions has also witnessed a wider adoption for jewelry stores, wherein customers can virtually try on the jewelry before they buy.

Planning and designing is another application in the AR in retail market to have seen a widespread usage. This is due to its use in furniture and lighting, and automotive interior planning applications. Customers can plan and design their home decor or automotive interior by virtually placing different products to get a sense of the real environment. 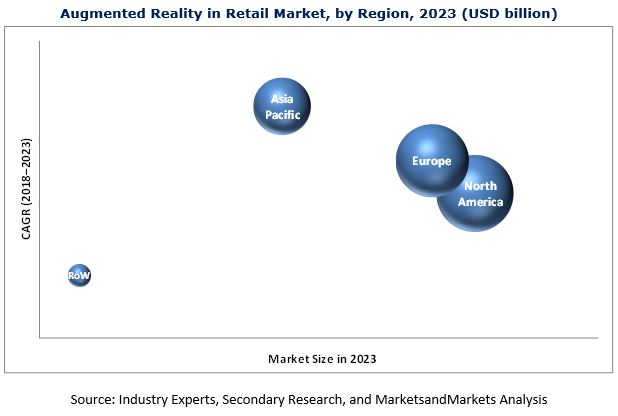 The lack of compatibility, interoperability, privacy, and security concerns associated with the use of AR restrain the growth of the AR in retail market.

This report discusses the drivers, restraints, opportunities, and challenges pertaining to the AR in retail market. In addition, it analyzes the current market scenario and forecasts the market size till 2023. Major players in the augmented reality in retail market are Google (US), PTC (US), Apple (US), Microsoft (US), Wikitude (Austria), DAQRI (US), Zugara (US), Blippar (UK), Marxent Labs (US), Augment (France), and ViewAR (Austria). The other players profiled in the report include Holition (UK), Ikea (Netherlands), Sephora (France), Amazon (US), Imaginate Technologies (India), Kudan (UK), Total Immersion (France), and INDE (UK). The start-up ecosystem includes Ads Reality (UK), XZIMG (China), VisionStar Information Technology (China), Zappar (UK), and Obsess (US).