The global Border Security system market is expected to reach USD 52.95 billion by 2022. It is projected to grow at a CAGR of 7.16% between 2016 and 2022. The main drivers of this growth are need for advanced technology security systems and the rising territorial conflicts and geopolitical instabilities. The use of Border Security system is going to increase exponentially in the future because of rising territorial conflicts, terrorism and geopolitical instabilities along with the need of advanced technology Border Security Solutions. The APAC market is expected to grow at the highest rate due to the the increased investment for strengthening the surveillance and weapon guidance capabilities by China, India and Japan, and increased spending of governments to tackle terrorist attacks, infiltration, illegal immigration and criminal activities.

Unmanned vehicles in Border Security system will be the largest revenue maker among all, as these systems help in unprecedented situational awareness, precision targeting, communications relay delivery for fighting and defeating threats in difficult terrains and most demanding and unknown environments without risking human life, no crew to limit its range and endurance and the fear of being captured. Biometric systems are expected grow at a CAGR higher than any other Border Security system  between 2016 and 2022 due to adoption of Biometric systems on a large scale to tackle illegal immigration, human trafficking, among others. Schemes such as development of national IDs, e-passports, and e-visas are expected to be the main drivers for it.

In terms of the different geographic regions, North America holds the largest share of the Border Security system market, and APAC market is expected to grow at the highest CAGR between 2016 and 2022. The major driver for the APAC market is the increased investment for strengthening the surveillance and weapon guidance capabilities by China, India and Japan, and increased spending of governments to tackle terrorist attacks, infiltration, illegal immigration and criminal activities. 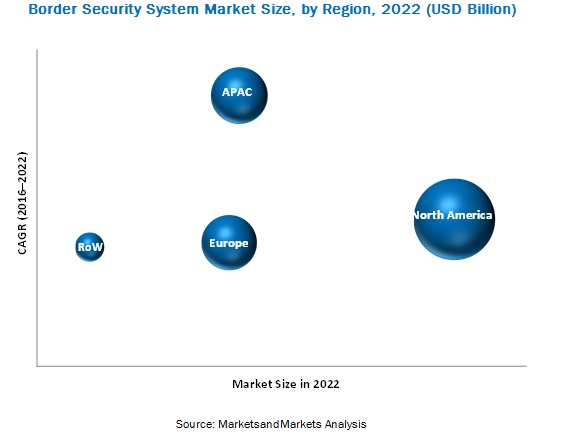 Aerial security systems perform security-aimed intelligence, surveillance, and reconnaissance operations with the help of airborne vehicles. Aerial security systems help in border management by scouting and reporting emergencies, monitoring accidents and crimes, surveillance of a certain landscape area, operating in highly busy areas , detecting vehicles and pedestrians, as well as their tracking from the sky, detecting low-observable air, sea, and ground objects, and so on. The aerial-based security systems include the use of air surveillance radar (ASR) systems, military aircraft and helicopters, unmanned aerial vehicles (UAV), among others.

Maritime borders are vulnerable due to proximity to critical infrastructures, such as ports, oil refineries, space stations, atomic power plants, and naval bases. Underwater security systems one of the most important aims is to detect, identify, track, and generate warning for all types of surface and underwater threats. Underwater security systems include submarines, autonomous underwater vehicles (AUV), advanced coastal surveillance radars, underwater inspection system among others.

One of the main restraints of the Border Security system market is the falling crude oil prices along the globe thus hampering the defence expenditure of some countries for a temporary period.  To balance this situation the some oil producing countries are resorting to cut in annual budgets, planning to limit the defence expenditure in some areas for a temporary period of time until the oil prices are stable again.