The small drones market is estimated at USD 13.40 billion in 2018 and is projected to reach USD 40.31 billion by 2025, at a CAGR of 17.04% from 2018 to 2025. The rise in the procurement of small military drones by defense forces worldwide is one of the most significant factors projected to drive the growth of the small drones market. The increasing use of small drones in commercial applications, such as monitoring, surveying and mapping, precision agriculture, aerial remote sensing, and product delivery, is also contributing to the growth of the market.

Based on type, the market has been segmented into fixed wing, rotary wing, and hybrid/transitional. The rotary wing segment is expected to grow at the highest CAGR during the forecast period, owing to the high demand from the defense sector for surveillance and reconnaissance applications. The demand for rotary wing from the commercial sector is also increasing, as these small drones are used in agriculture, wildlife survey, search & rescue operations, firefighting, law enforcement, photography, and disaster management.

Based on region, the small drones market has been segmented into North America, Europe, Asia Pacific, the Middle East, Latin America, and Africa. North America is estimated to be the largest market for small drones in 2018. The increasing use of small drones for border and maritime surveillance activities in countries, such as US and Canada, is driving the growth of the market in North America. 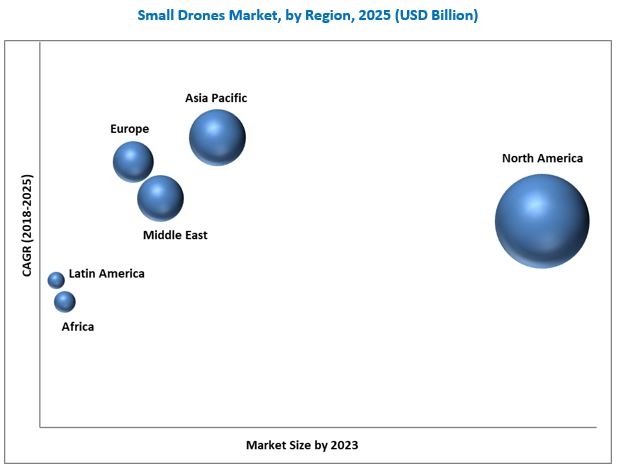 Lack of proper air traffic management for UAVs and issues with the safety and security of UAVs are acting as key challenges to the growth of the small drones market. Major companies operating in the market include Northrop Grumman (US), Textron (US), Boeing (US), DJI (China), Parrot (France), 3D Robotics (US), and AeroVironment (US). New product launches and supply contracts were among the key growth strategies adopted by leading players in the market from 2012 to 2017.